THE FIRST HUMANOID ROBOT FACTORY OF TURKEY AND WORLD; AKINROBOTICS IS RISING!

AKINSOFT laid the foundations of robot factory which is the first of world at 26 December 2015 to start mass production of robots by making real its visions that were assigned at the date it was founded one by one and studiously. This attempt which is the first in Turkey and world, started with an utophia in a 15m2 small office. Making R&D studies on Robotics Technologies that is one of the visions of 2010 and realizing them become the fore for realizing the one of 2015 visions which is producing robots massively. AKINROBOTICS, now is under construction, will be active soon and one of the AKINSOFT visions will become real.
Under the leadership of Özgür AKIN, AKINSOFT Robotics Department that started to work for making real the vision “Mass Production of Robotics Technologies” on 2009, Presented the agriculture robot AS-PNCR-1 on 30 May 2011. AS-PNRC-1 which increase the yield to 95-96%, can seed 10 lines. Also, after scanning and describing the field once, PNCR-1 can plant, manure, weed and spray weed killer without waiting another order. Apart from these, it can also seed beet automatically, controls the field for repeating sowing after germination and if requested, it can do soil analysis for water and manuring. The work of AKINSOFT after AS-PNCR-1 is Humanoid Robot AKINCI-1 that was published on 14 July 2011. AKINCI-1 which is the first humanoid robot of Turkey can walk, speak and answer the questions, calculate math problems easily and follow orders and images. On production, native materials were used and Turkish engineers and technicians took in charge.
AS-PNCR -2 is next work of AKINSOFT Robotics Department under the leadership of Özgür AKIN, who is chairman of AKINSOFT and Computer Engineer. AS-PNCR-2 is the developed version of PNCR-1 and it has renewed mechanic structure, increased mobility and workableness with solar power.
AKINSOFT, keeps producing on Robotics Technologies, developing and working regarding innovation, presented AKINCI-2 prototype which is the first commercial mobile robot of Turkey on 12 April 2013. Additional to AKINCI-1 abilities, AKINCI-2 can walk, save its balance and resist to the external physical effects, describe more than one object, focus the people who are close to it, hold objects, tell and reply asked questions by searching on internet and scanning databases, do mathematical operations easily, track display and perform the given instructions.

Humanoid Robot AKINOID of which project was started on 13 April 2013, is under constuction and created by adding innovations. It will be published soon. AKINOID abilities are; seeing in 3D, describing and following objects, detecting human, walking, standing in balance, developed speaking, sensing temperature and smell and commenting. AKINSOFT shows how much value it gives to human and humanity at every opportunity and how much sensitive at this point from the date it was founded. For this reason, Presentation of Robot ADA that is the first and only waitress robot of Turkey and showing her abilities and services was performed in Cadde Meram Cafe and Robotics Application Center which is the first robotics application center of Turkey was established on 26 March 2015. Waitress Robot ADA can take tray from kitchen, taking tray to table, walk, speak, see and detect obstacle.

AKINSOFT represents our country over the world by producing high technology in middle Anatolia where hosted many civilizations. New employement fields for people are being created, challenging the technology of world and is waiting for the year of 2023. AKINSOFT works hard to establish the vision of AKINSOFT High Technology University and R&D Center of Space 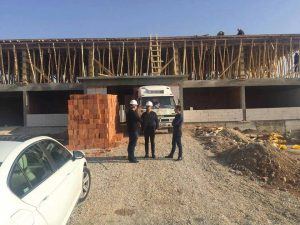 AKINSOFT that have made the visions come true from the establishment date will not make the high-tech enthusiasts and AKINSOFT family surprised regarding the vision of the year of 2023!