4 LEGGED ROBOT “ARAT” IS IN THE FIELD 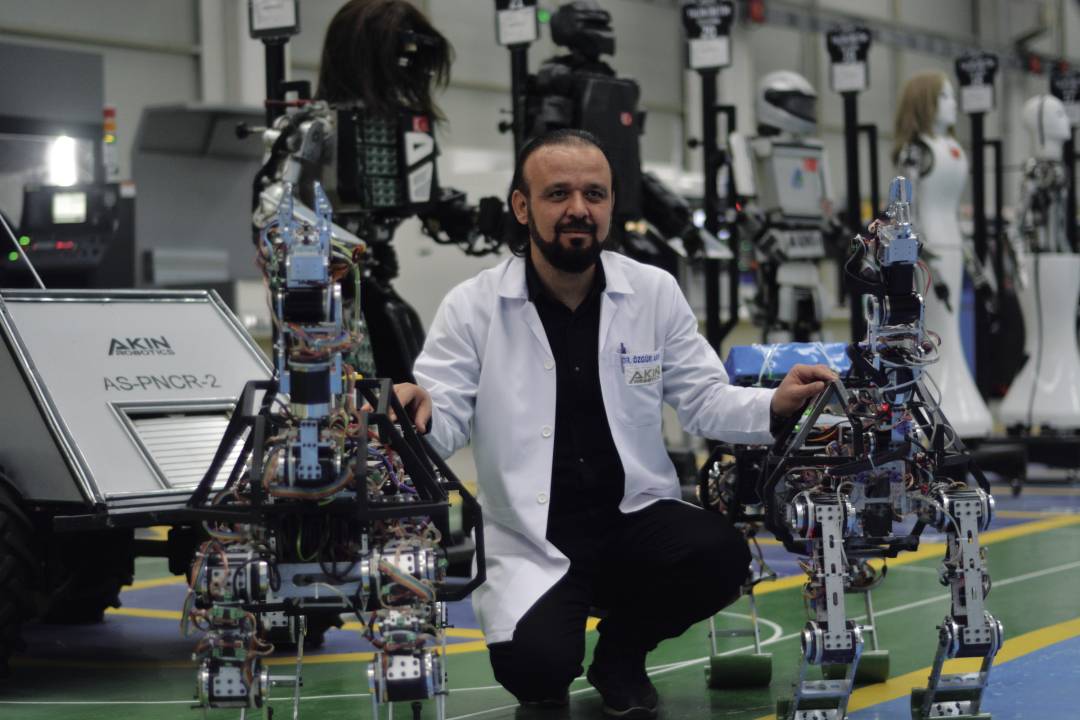 ARAT is designed to be compatible with all kind of terrain conditions and it can carry objects. So, ARAT will be able to be used in search and rescue operations.

We continue adding value to humanity and building future of the world with our projects on IT and Robotics technology. As AKINSOFT, we have established our “Turkey’s Domestic Robotics Brand AKINROBOTICS”. Since we have started mass productions in 2017, We are getting bigger and creating new projects in order to serve humanity.
Four legged field robot “ARAT” is one of our newest projects.

As you will remember, I had written in my last article about AROS (AKINROBOTICS OPERATING SYSTEM), our domestic robot OS.
In this article, I want to share information about “ARAT”, the latest project of AKINROBOTICS “World’s First Humanoid Robot Factory” that we opened in 2017.
ARAT is actually a prototype that is designed to be moving in the field with its 4 legs.
A prototype that we developed with entirely domestic recources, ARAT can copy the nature through ”Biomimicry” science and create a balance in order to move on the field very comfortably. Thanks to its 4 legs, ARAT can walk on the field as it maintains the balance.

It will also have an advanced observation ability thanks to its neck consisting of 4 engines.

The most important element of ARAT which has got a structure that is capable of carrying load up to 30 kg and is equipped with 86 sensors in order to move on the field as parallel to its production purposes. ARAT’s carrying capacity is up to 1.5 kg for now.

After the progress of its development it will have an integrated stereo vision camera which allows it to perceive the depth. It will also move around by determining the sounds of it surroundings and it can develop strategies in order to avoid or overcome the obstacles around.
Thanks to its detection system, it will be able to recognize the voice commands and communicate by responding to commands.

Thanks to the lithium-ion battery technology, ARAT has a very advanced battery life and it can work for 10 hours. Its battery life can be extended further via solar panels support.
This is the second prototype of ARAT series that we started to develop within two months.

This work, which is still in the prototype stage, can become a product in a few years and it will be able to be assigned to many tasks in the field conditions.

With its stereo vision camera system, ARAT will be able to create road maps by perceiving the depth. At the same time, thanks to the system that we call “beacon”, it can make addressing in closed and narrow areas and it will be able to perform work in sensitive areas even around 10 cm.
It will listen to the voices around via its sound system and it will be able to detect the voices where they comes from, determine paths or strategies in order to fulfill tasks.

At this point the speed factor may come to minds. This prototype cannot perform the desired speed but our work about this subject continues.

Our projects and algorithms will be developed by accelerating our engines in order to increase the speed of ARAT.

The changing world conditions and developing technology bring new needs in every aspect of life. As a result of these needs we developed ARAT as a field robot that has 4 legs which was designed to be compatible with all terrain conditions.

ARAT can carry objects and it can be used in search and rescue operations.
When a satellite connection system is installed on the ARAT, it will be able to take miles in the field independently of humans and if it recharges itself with daylight, it can keep moving forward.

In an environment where the importance of domestic and national production is understood every day more and more, first of all, I would like to mention that we produce our components by ourselves. We are developing our smart servos that can produce high torques without gap. They are the very first domestic servos of Turkey. We have spent about 10 years for their R&D process and then we have developed our first circuit systems with our software. We have developed ARAT completely with domestic resources in a period about 2 months until now and its development will be continued. We are working as 160 employees in our facility. Considering about 60 employees at engineer level are working especially for this project, we have also many projects that development processes are in progress except ARAT. Such as “Mini ADA”, “ADA GH6” series, agricultural robot and “AKINCI” series that we call biped robots which they can walk.

Today, while the nations with high technology are making progress, the ones who do not have a say in high technology become dependent to developed countries. Therefore, the only key of the competition power of the countries is technology so that the most determinant factor for a country to have a share from the world economy; is its supremacy in the technology field and its investments on R&D. At this point, it shouldn’t be forgotten that full independence is impossible without technological independence. Because today, governing the societies is to manage the information. And managing the information is only possible with technology. From this point of view, we as AKINROBOTICS breaking grounds many times in our country, keep working in order to improve our robots with the awareness of our responsibility to our lands and country. As we keep making progress through our projects in the direction of high technology, we will continue to render service to science and humanity with new projects.

PhD. Özgür AKIN
AKINSOFT – AKINROBOTICS
Chairman of Board of Directors