10 YEARS WITH HIGH TECHNOLOGY “To our country, science and all humanity, proudly” PhD. ÖZGÜR AKIN 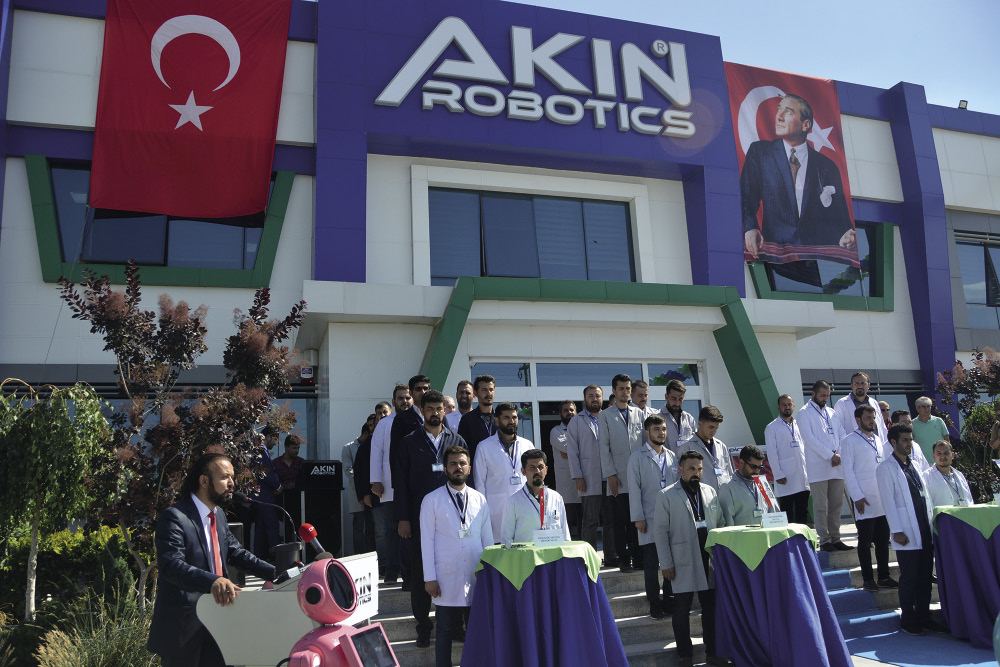 Our company, AKINSOFT, which we established in 1995, is 24 years old today and it has become one of the largest software companies in Turkey with more than 120 software, mainly ERP software, and with over 2000 solution partners. In 2009, we realized the goal of “starting R&D studies on robotic technologies in 2010”, which is one of our 28-year visions that we set up in the days of our establishment. We continued these studies in the laboratories we established within AKINSOFT for 8 years. We took the title of “The World’s First Humanoid Robot factory” as AKINROBOTICS with its first and even many features in Turkey after realizing our vision for 2015, which we set in 1995.

In order to reach world standards on behalf of our country and to maintain high technology in our own lands; We have invested in robot technologies with our equity capital for 24 years. Our goal is to serve humanity and science. To enable people to work in more qualified workspaces by assigning robots to jobs that people do monotonically, which will threaten Occupational Health and safety.

In this context, we have produced over 100 various robots, mainly AKINCI, ADA, ARAT, PNCR and ROBOTIC ARM for different areas such as agriculture, industry and service sector. In order to be a light for future generations, we hosted over 20 thousand guests from all corners of our country such as academicians, students and technology lovers on technical trips organized in our factory on certain days to support education.

In addition, we have brought our domestic products that reach world standards such as Motors, development cards and robotic components to our students in order to use on projects in the education sector, with sponsorships and prices of 1 in 5 of the market. As AKINROBOTICS, which has carried out all of our productions with our own equity and all our domestic facilities, the point where we come today is of great importance in terms of showing the level reached by our domestic and national technology.

I would like to state once again that we have realized the design and production of our mechanical systems, electronic systems and software in our Robot production together with our high-tech team. At this point, I would like to mention our new project, “robotic arm” prototype work.

The Robot arm can be expressed as a whole of programmable mechanical parts or as part of a complex robot. Robot arms, which have become an integral part of the industry today, have a wide range of work that can be used in various industrial areas including CNC machines, and are used in many applications such as material handling, automated machine support, painting, mechanical cutting.

In this direction, this technology contributes significantly to today’s technology by minimizing manpower and decreasing the error rate and increasing the amount of production to higher levels.

As AKINROBOTICS, we celebrate our 10th Year as Turkey’s domestic Robotics brand these days, we have added a new one to robotic products that we develop:

We have shared with the public the first prototypes of our robotic arm project which is still in the process of R&D. The robotic arm will hold, release, place and carry objects with its multi-purpose flexible mobility. It is also able to access all points within the working space in the desired direction thanks to its kinematics of 6 joints.

With 80 cm length, 15 kg weight, 3 kg carrying capacity and 0.02 mm precision, all mechanical and electronic design, production and software improvements, including the actuators we use in the robotic arm, are carried out by our own supplement.

Users can also use the ARGUI program developed by AKINROBOTICS to program the robot and examine its data. ARGUI, where robots perform many operations such as identifying all robot arms connected to the system, tracking telemetry data, transmitting instant alerts to the user, can also be programmed very easily with user-friendly functions.

The Robot arm has different abilities such as adjusting the clamping force of the jaws according to the object it will grasp by user interface, holding, releasing, placing and carrying the objects with multi-purpose flexible mobility as desired, grasping the object by wrapping it outside with adaptive holders, holding the object inside, grasping large and shapeless objects with straight and stacked pieces.

The robotic arm was built to work with people in all areas where they work in order to increase the efficiency of your business processes, reduce production costs and automate your applications by making them easier. In addition, these robots will be engaged in tiresome and unsafe jobs that negatively affect human health.

Collaborative robots help workers in factories by interacting with humans during the production stages, enabling quick and flexible automating of business processes. The increase in production mobility and the development of technology has forced people to use machines to help themselves. Since operations in the electronics, industry in particular, are sensitive and complex, it has become inevitable that arm robots, an effective solution for minimizing the error rate, will be used in the production of fragile and expensive electronic products.

Today, when we look at today’s industrial world, it is possible to say that collaborative robots make up the largest share in the robotics market due to increasing demand every day, especially in the automotive sector. I would like to point out that in the industry of the future, besides the tasks such as transport, welding, surgery, painting, I think it will be well above the current potential in more creative areas. With the Robot arm developed by AKINROBOTICS, we are able to offer solutions to your systems on all automation lines from a single robot system according to the demands of the users.

We have the opportunity to design in accordance with the consumer’s intended use and requirements. We will continue our work on the high-tech path with the power we have taken from our past and our faith in building the future. Success on the road to freedom is possible through production. If you produce, you will not be destroyed, if you produce, you will develop, if you produce, you will not obey. Vision of our country; domestic and national production. We have to show more of the will to carry our country to its goals by working hard and producing a lot. In this sense, we have produced our domestic humanoid robots with high technology, without being dependent, by our robot factory, which we have established with our equity.

I congratulate my teammates who have tried to carry this flag to the climax in the fields of software for 24 years and in robotics technology for 10 years, in front of you. We will continue our work with all our efforts by carrying the slogan “Turkey’s vision” on us with national consciousness. Let us not forget that “Nations that do not give due importance to high technology are obliged to be slave on their own lands while supposing they are free.”